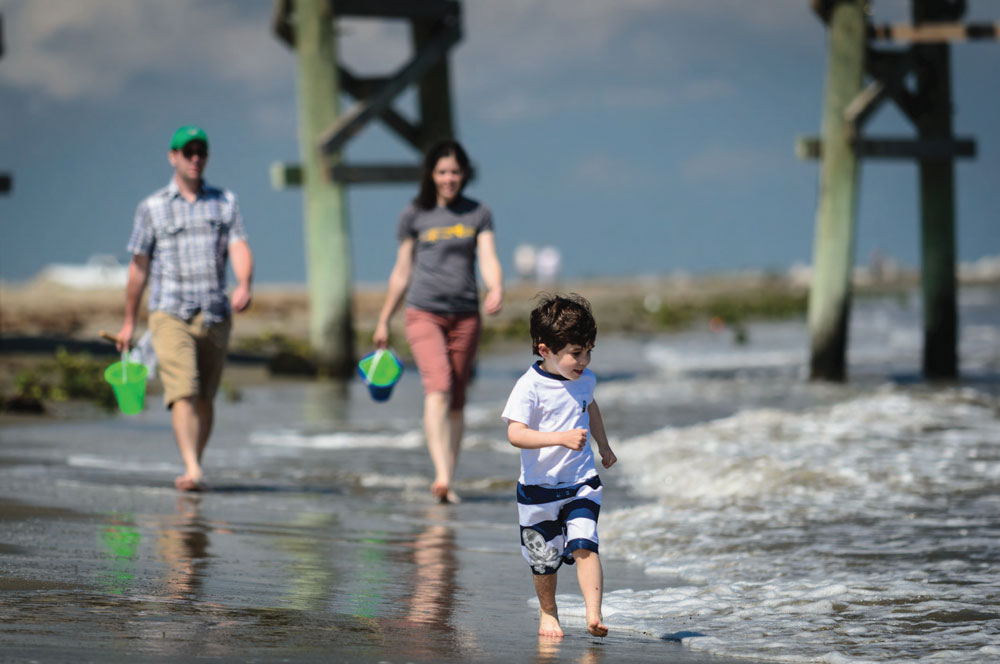 As the parents of two children being raised in the city, we spend our weekends treating the boys to “adventures” across the state—and sometimes across the country. In fact, we travel a lot. Our oldest, who just turned four, has been to California three times and seen the Redwoods, Sequoias, Yosemite and Death Valley. He’s built sand castles on the beautiful, but cold beaches of Oregon and Washington, posed with the dinosaur skeletons in D.C.’s Natural History Museum, and hiked the Appalachian Trail in North Carolina.

Yet, if you asked him today where he wanted to go on his next adventure, he will say one of two places – New Orleans’ Audubon Zoo or Grand Isle. It’s easy to overlook the beauty of your own state. How many people travel to a new city or country, break out the guide book and go page by page through all the attractions to see? Yet, why do we so often dismiss the splendor in our own backyards?

Grand Isle is a gem floating in the marshes of Louisiana’s elusive coast. Perched on the edge of a landscape rapidly eroding away, the island’s presence is a permanent fixture transcending time. To be fair, there’s nothing about the island that screams “Put me on your bucket list.” There’s no largest tree or national park, no five-star resort or extreme sporting. On the surface, it’s another rural town known for its proximity to big fish and even bigger oil rigs. In reality, a weekend here can transform your life, making a lasting impression of a cherished vacation.

To children and adults alike, Grand Isle is a place where you can let the warm air envelop your being and slow down your pace in life, allowing you to do as much or as little as you desire. It’s a place where you can lounge on the beach for countless hours, watching the porpoises and pelicans go about their daily routine. You can fish from nearly every inch of the island, and if you still yearn for more, you can take a boat out to test the waters offshore. Meanwhile, the bird sightings on this top migration spot verge on phenomenal.

A vacation here can take on any number of variances, but one of my favorite trips to Grand Isle was during last year’s Migratory Bird Festival. An early morning drive led us through the watery marshes that seemingly shield the barrier island from the encroaching Gulf waters. As the final bridge descended upon the island, we decided to feed our hunger pangs before venturing any farther.

We picked up some poboys at Bridgeside Marina and carried them over to the nearby beach for a picnic lunch. The wind whipped in our face, blowing sand and our napkins across the parking lot, but our 3-year-old was oblivious while he marched off with bucket and shovel in hand. The beach here is not the fine white sand you find in Florida, but it stills serves its purpose as a base for elaborate sand castles. There are other perks too, as the wild animals seem to linger closer to the shoreline than I’ve seen elsewhere. The porpoises appear within arm’s reach, while the pelicans swoop just overhead.

After lunch, we drove to the far end of the island to Grand Isle State Park. The park was free for the birding festival, and we took advantage of its viewing platform to gaze out across the island. A leisurely walk down the 400-foot fishing pier led us to several weekend vacationers manning fishing poles. In the 20 minutes we stood watching, there seemed to be a constant influx of fish and even an enormous sting ray was reeled in. We later learned that more than 280 species of fish swim in the salty waters around the island, and that’s not to mention the countless crabs and shrimp.

On to the birding festival, we parked our car at the Nature Conservancy trailhead marking the entrance to the Grilleta Tract. One of the last remaining stands of maritime forest on the island, it’s a prime location for a phenomenon known as a “fallout.” When thousands of exhausted, migrating birds fly into a thunderstorm, they are forced to fall out of the sky and seek refuge in the island’s trees. Our arrival didn’t coincide with a storm, but we still saw hundreds of colorful birds—and dozens of onlookers—along the trail.

The trail ended at the backyard of Bobby Santini, who welcomed us onto his property to view his pictures of birds and taste the berries from his mulberry tree. Our eldest son’s sudden interest in Mr. Bobby’s golf cart had him taking the toddler and my husband for a ride. Meanwhile, I sat on the porch swing with our 1-year-old, who flirted away with Mrs. Santini. It turned out the native Grand Islanders lived in a 213-year-old house—the oldest on the island—and it had survived both hurricanes Betsy and Katrina.

The golf cart ride revealed a great playground just a few streets away, and we stopped over to explore it and let the kids run off some energy. Later, back on the main road searching for a dinner spot, we found a cute souvenir shop where we landed a pirate’s hat and picked up some shells. The shop’s owner recommended some fried fish at one of the local seafood restaurants along the main road and we eagerly devoured our food.

We left late in the evening, watching the final pink rays fade below the horizon while laughing quietly at the kids knocked out in the carseats behind us. It was a long day for our little family of four, but it made the first of many Grand Isle memories for us.

Subsequent journeys revealed how much more we had missed on that initial trip, such as the joys of taking out a chartered fishing boat, the amazing sights at the pelican rookery known as Queen Bess Island and the simple lure of a quiet walk on neighboring Elmer’s Island.

Next time, I’m determined to pitch my tent on the beach at Grand Isle State Park and fall asleep at the water’s edge. Perhaps we can even explore Fort Livingston or search for the forgotten, buried treasure of frequent visitor Pirate Jean Lafitte. As the kids grow older, I’m sure their interests will change as well, but there’s something about this wild, natural island that continues to beckon us year after year.